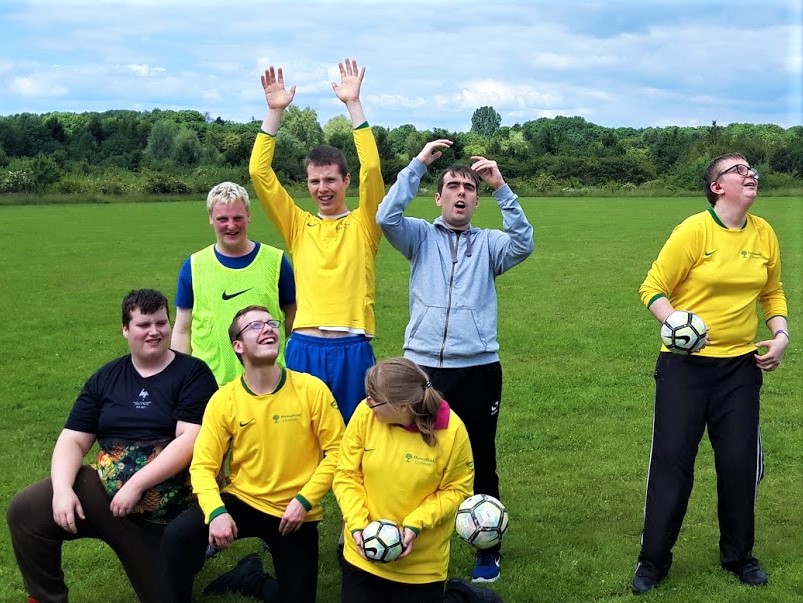 It’s the end of the academic year for our colleges! As staff and students hopefully have a chance to catch their breath and enjoy the summer, we’re here to round up the highlights from the specialist sector.

Students have been celebrating their achievements, winning awards and fundraising for their colleges – a perfect way to top an incredible year of achievements.

Congratulations to all students who have graduated and are moving on to pastures new. From all of us here at Natspec, we wish you luck in the next stage of your lives. 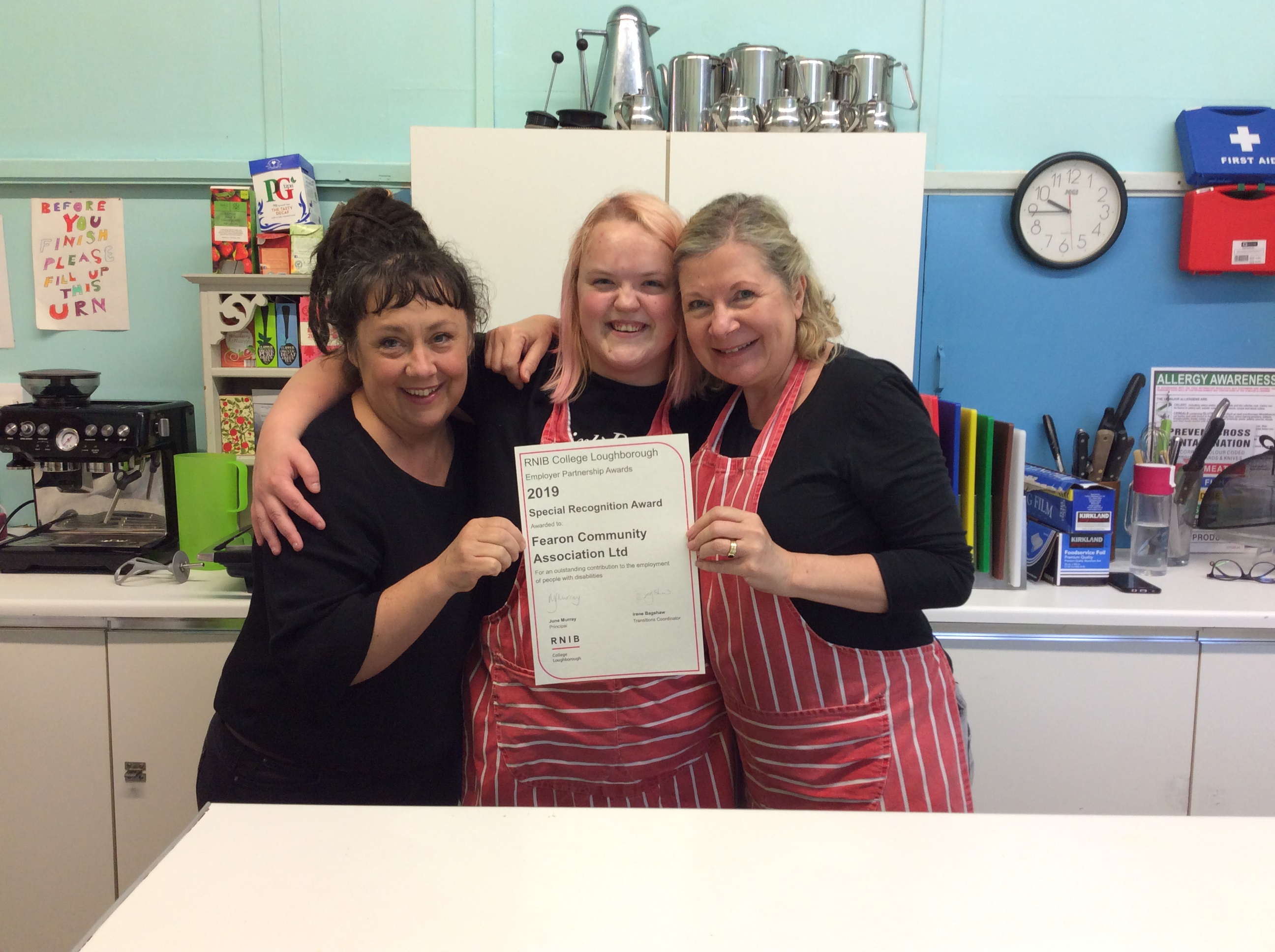 Students at RNIB College Loughborough spent the last few weeks of term thanking the supportive local businesses that the college has partnered with over the last academic year.

64 RNIB College students have undertaken an external work placement or internship since September 2018. These are an excellent opportunity for them to continue to develop the key skills they learn while at college. This year’s work placements have varied from catering in Loughborough University’s Halls of Residence, to local community projects and work experience in charity shops.

To say thank you to all of the employers who have supported them each year, RNIB College Loughborough run the Employer Recognition Awards at the end of the summer term. During this time, students hand-deliver certificates to employers, while a few receive a special award for their support.

This year, Tesco (The Rushes) received the Debut Award for an excellent first year of partnering with the college. The Outstanding Employer Award has been awarded to Loughborough University, who provided a number of opportunities for students this year. The college hopes to progress the relationship with them further in the year to come.

And finally the most prestigious Award, The Special Recognition Award, was handed to Fearon Community Association for their continued support of RNIB students in the community. 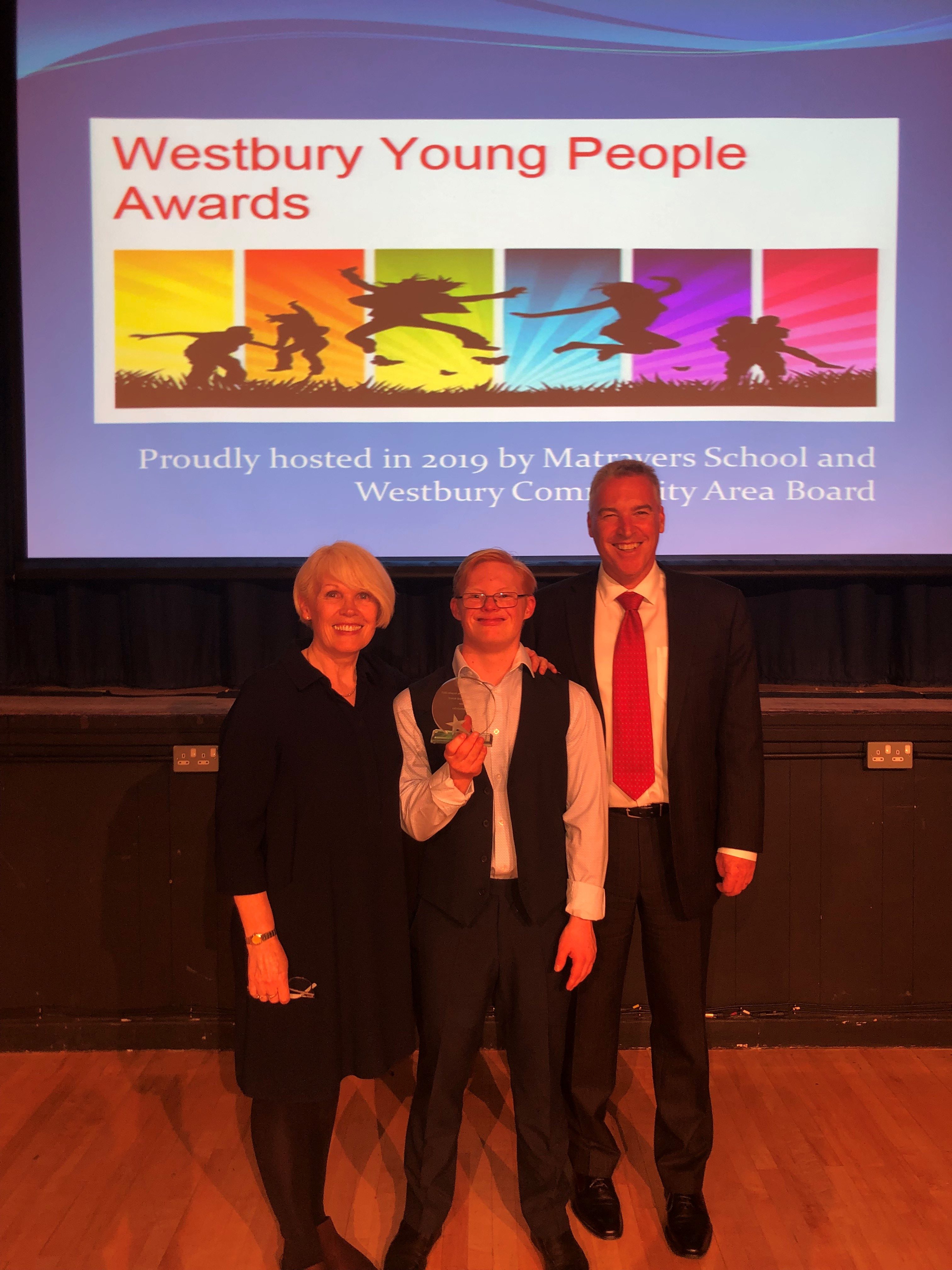 Harry Humphries, a student at Fairfield Farm College, is celebrating a massive achievement as he achieves the accolade of Young Individual Sportsperson from the 2019 Westbury Young People Awards. Harry started his swimming success story in April 2017 where he was spotted at a gala in Southampton specifically for people with Downs Syndrome. From that point, he has been travelling across the world from Canada to Kosovo, taking part in competitions and also representing Team GB.

The award was presented at the awards ceremony at Matravers School on Wednesday 19 June, where the prize was jointly awarded. This was the first time there were 2 winners of this category, due to the phenomenal talent of the 7 young people nominated. Harry was extremely pleased to receive his trophy, with students and parents all in attendance for support and to celebrate his achievement.

Harry joined Fairfield Farm College, Dilton Marsh in September 2018 as a residential student. Harry joined Warminster Swimming Club, near the College, so that he could increase his training to include an early swim and a one to one evening session with his coach.

As well as attending college full-time, undertaking training for work and independence as a young adult, he is also swimming 5-days per week and competing in various competitions and galas across the globe. He continues to beat his personal best records, regularly winning gold, silver and bronze medals. Harry is focusing on his future and is currently training to qualify for the next Downs Syndrome European Championships in Sardinia in September this year.

On Friday 21 June, students spent the day at Sileby Town Football Club to learn about Mencap’s ‘Round The World Challenge’, a programme to help people with learning disabilities get involved in sport supported by Sport England and the National Lottery, and practice their football skills with Inclusion Coach Sarah Jones from Leicester City Football Club.

This year’s Learning Disability Week focused on the theme of sports and inclusion; taking part in a sport can be a great way to tackle isolation that people with learning disabilities experience, as well as helping them keep an active lifestyle and improving communication and team-working skills.

“We also know that taking part in sport helps people with a learning disability feel more confident, healthy and a part of their community. We hope that all of the students at Homefield College had fun, developed their football skills and now feel more confident in accessing local sports facilities to make taking part in sport a key part of their life.”

Overall, students and staff had a great day, learning new football skills and keeping active for the afternoon. 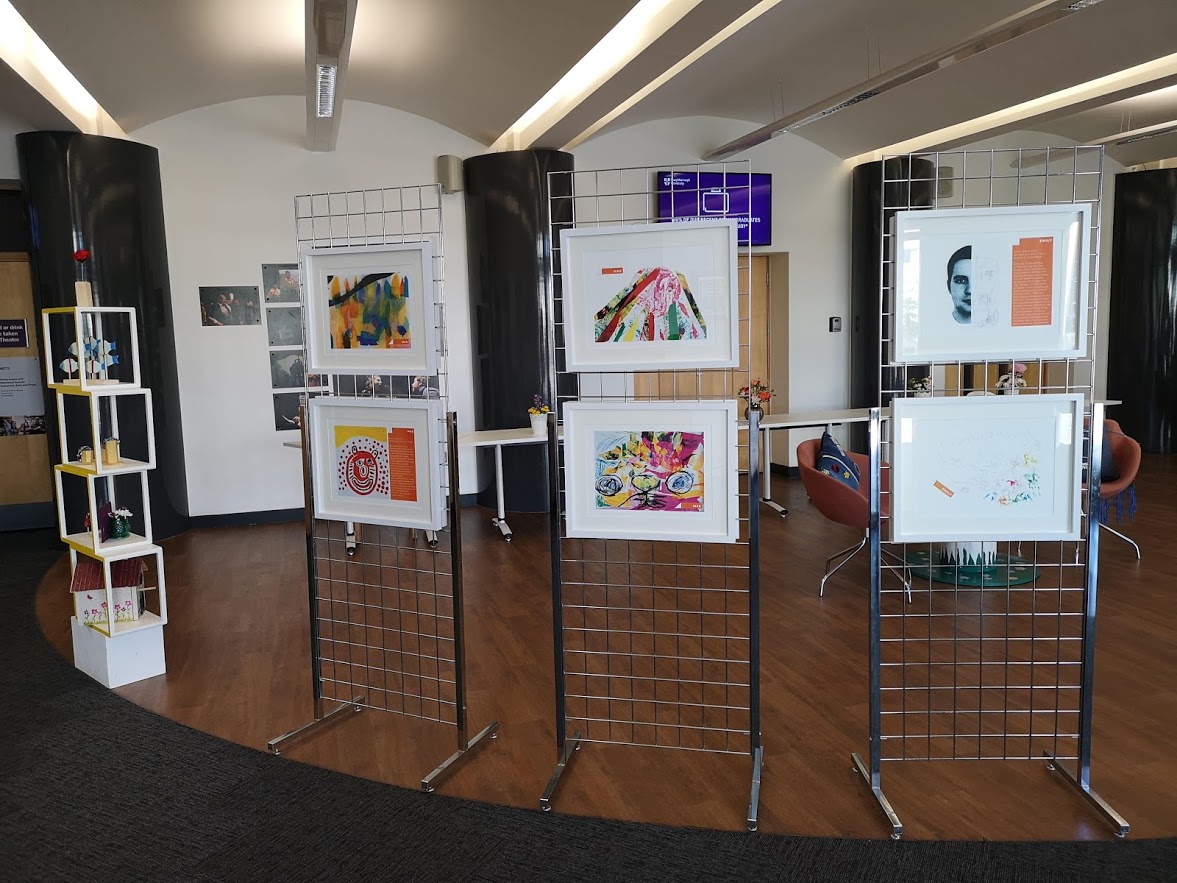 Staff and students from Derwen College have successfully completed a cycle challenge around Lake Vyrnwy to raise funds for the college. The challenge, led by college student Mackenzie Beeson saw students take on the full distance of the Mid Wales beauty spot – a distance of 14 miles.

Mack and his friend Joe Simpson cycled the lake in adapted bikes and their fellow cyclists used traditional mountain bikes. Derwen College Sports Co-ordinator Steve Evans also cycled the distance in an adapted bike to highlight how tough the challenge was for students with disabilities. Training for the challenge, he said: “These students’ commitment to cycling Lake Vyrnwy has been inspirational. I wanted to understand and highlight the challenge of riding an adapted bike on a long-distance route by trying one out myself. It has taken me out of my comfort zone and given me more of an understanding of how hard Mack is pushing himself for this challenge.”

This is the first time that Derwen College has embarked on a charity event like this – but, spurred on by Mack’s determination to cycle around the lake, the idea soon took flight and eight other students wanted to join. They threw themselves into training and ensuring they had the equipment needed to complete the challenge – bikes, adapted and conventional, supplied by the generous team at Pedal Power in Alyn Waters – as well as fundraising efforts. All in all, they managed to raise £1500 for the college!

Lost Boy and the Canterbury Tales performances at Orpheus

The Orpheus dancers were invited to perform ‘Lost Boy’ at the Queen Elizabeth Hall on the Southbank at this year’s U.Dance 2019. The Orpheus dance group created this piece for an inclusive dance research seminar in February 2019 with the ISTD and the University of Bedfordshire (as previously featured in the Natspec Highlights!).

Orpheus’s end of term student production was The Canterbury Tales. Rachel Martin, Curriculum Manager for Performance and Outreach, said: “Geoffrey Chaucer, known as the Father of English Literature, has given us so many laughs and moments of poignancy this year, and has been a font of inspiration for stories, giving us this year’s Summer Production! Always wanting to challenge and stretch ourselves, we decided to stage this production site-specifically, all around the college. This required our audience to be more active, but allowed them in turn to fully immerse themselves in the Middle Ages.

We produced 11 of the 24 stories Chaucer wrote, and worked in varied art forms including tapestry, dance, devised theatre, installation, song and film. The students researched and reinterpreted each story and were able to retell Chaucer’s work in their own way.”

Students at Catcote Academy produced a lip dub video to Katy Perry’s ‘Roar’. Produced to raise money for their performing arts department, lead roles were taken by performing arts students across the school and college. The aim of the performing arts programme is to give students opportunities to express themselves and break down the barriers that hold them back.

The video was shared widely and caught the attention of the team at ITV’s This Morning. The school and college was featured live on the show on the 12 July, showcasing the best of specialist provision and how everyone can get involved in performing arts. Holly Willoughby and Phillip Schofield even had a special surprise for the staff and students as they revealed that the show had put in the money for the funding goal to be met. Currently, they’ve raised over £12,000 to put towards performing arts!

QAC were delighted to welcome two very special visitors to open this year’s Summer Games. TV presenter and resident Brummie Alison Hammond along with Chief Executive of the Greater Birmingham Chambers of Commerce Paul Faulkner, joined staff and students to say a few words before officially declaring the games open!

The Summer Games are a brilliant time of the year for all at QAC, bringing everyone together and providing a fun and competitive end to the academic year. This year’s Summer Games theme was ‘Inventors and Inventions’, with each student group picking a famous inventor or invention to research and base their performance/presentation on – some brilliant choices were included, ranging from Nikola Tesla to the vacuum cleaner!

The collaborative effort of everyone at QAC to make the games what they are created a brilliant atmosphere around the College campus which was thoroughly enjoyed by all involved.

We’ve been adding to our collection of student success stories! If you’ve got some time, why not read about Tom, who’s secured paid employment as a barman in London following work experience, or Mitchel, who’s combining work with Paralympic training, or the success of three Lukes from Hereward College who have all secured paid employment at Holiday Inn.

Derwen College opens its first series of Skills Live competitions with competitions running between 21-25 October at the college. The competitions are open to young people aged 16-25 years old with SEND who are currently in mainstream or specialist colleges or schools.

The deadline for competition entries is Friday 13 September. Art competition deadlines from 2 August.

The competitions provide an opportunity for young people with SEND to showcase their work skills to a wider audience. It is also a useful introduction to competition and form good preparation for any student to enter the national World Skills UK competition in 2020.

Natspec has released statements welcoming Gavin Williamson as the new Secretary of State for Education, and Kemi Badenoch as the new Minister for Children and Families. Both face immediate challenges in their new roles.