Unlike incorporated colleges (which came out of local authority control and became designated under the 1992 Education Act), there has never been an official legal status for specialist colleges.

The Department for Education, various funding agencies and Ofsted have used several terms over the years to categorise the sector, for example Independent Specialist Colleges (ISCs), Independent Specialist Providers (ISPs). The sector is currently described as ISCs by Ofsted and SPIs (Special Post-16 Institutions) by ESFA and DfE. Natspec describes members as “specialist colleges”.

Specialist colleges are independent in a range of different ways, with their own legal status, including charitable status – charities in their own right or part of a large national charity. Some are privately owned or owned by care companies, but most are now not for profit, and all are publicly funded for education under the same funding system as the rest of the FE Sector. Governance arrangements vary depending on the requirements of their ownership.

The sector goes back a long way (Royal National College for the Blind was formed over 140 years ago), with many others setting up post-war to support returning veterans and offer rehabilitation and training. Natspec was set up in 1985 as a membership body to represent these organisations, whose main aim was to provide education for young people with learning difficulties or disabilities, and at that time they were funded directly through local authorities.

The 1992 Act brought the specialist colleges into the Further Education Funding Council fold for placement and funding purposes and they became subject to FEFC inspection, and they have been subject to the same funding and inspection regime as the rest of the FE sector since then (currently funded by ESFA, local authority high needs budgets and inspected by Ofsted and, where relevant, CQC).

Throughout the 1990s and 2000s, the list of specialist colleges funded by the various funding agencies remained fairly static at about 57. In the period between the YPLA finishing and the EFA High Needs Funding system being introduced in 2013, the number slowly rose to around 75 colleges (the year before the 2014 Children and Families Act came into force).

Since the merger of SFA and EFA, and the market entry and due diligence system for becoming approved as a new specialist college, the number has risen to over 110 SPIs funded by the ESFA.

The slide below shows the rise in the number of SPIs and the advantages and disadvantages of new provision. Natspec’s position on new provision is on our website. 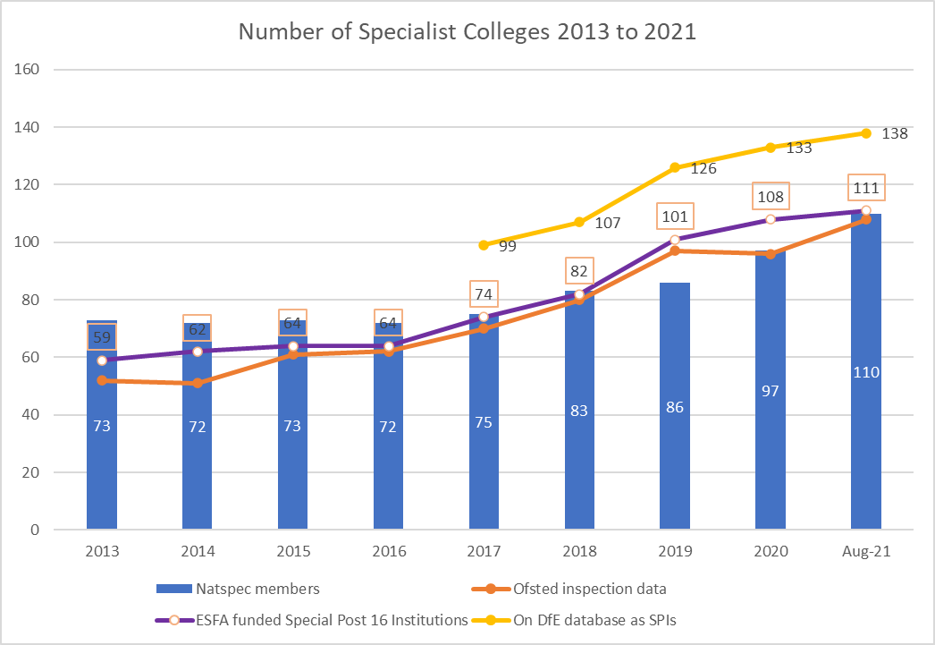 S41: Under the Children and Families Act, there is an option for specialist colleges and other organisations, including ILPs working primarily with high needs students, to apply to be on the Secretary of State’s Section 41 list. This does not change the legal status of any of the providers on the list, but does give them some rights and responsibilities under the Act (and for no other purpose). Most, but not all, ESFA approved specialist colleges have applied to be on this list.