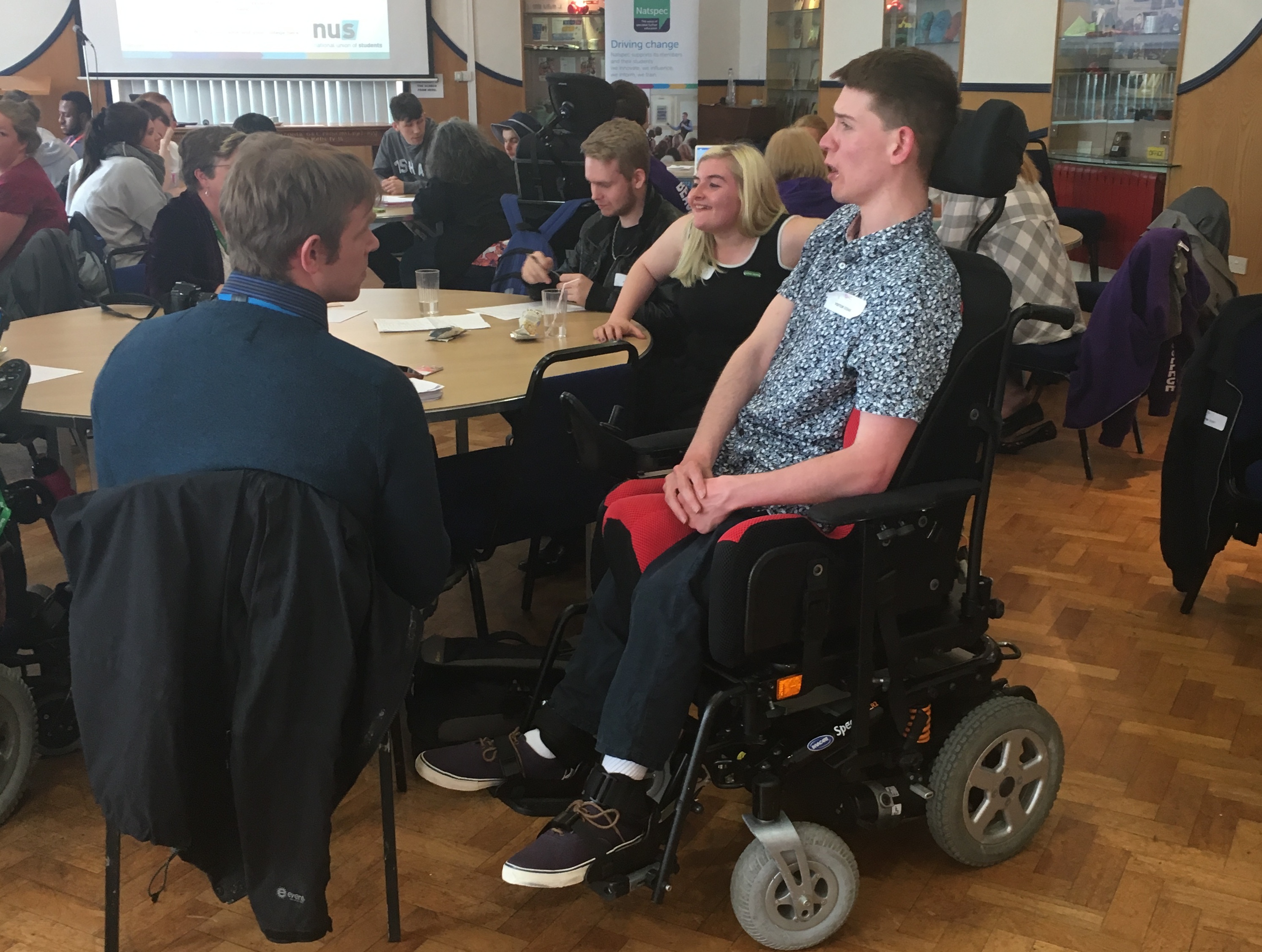 Students with disabilities are uniting to ensure their voices are heard on a national level.

Students with disabilities are uniting to ensure their voices are heard on a national level.

The Student Voice Parliament has been launched by Natspec, the membership association for organisations which offer specialist provision for students with learning difficulties and disabilities, in partnership with the NUS.

“It was a good opportunity to talk about what kind of issues we are facing and how many of them are similar,” said Harvey Duncan, who is a first year media student at Hereward College in Coventry.

He said one of the big issues was access to public transport, in particular the appropriate use of wheelchair space on buses.

One of the biggest concerns of the Student Voice Parliament was the issue of funding for education. Students attending specialist colleges are funded by their local authorities.

Budget pressures mean it can be just days or weeks before term starts when young people learn whether they have a college place.

“It’s unfair that others can go to college in a straightforward way but young people with disabilities must wait, often until the last minute. That uncertainty about our futures is hugely stressful,” said Harvey.

Cameron McQueenie, a third year student at Beaumont College, Lancaster, agrees. “I feel very strongly about this. You shouldn’t have to fight for funding for education. An able-bodied person can get an education but a disabled person has to fight for everything.”

The 21-year-old has welcomed the established of the Parliament and the involvement of the NUS, which will help the student unions at specialist colleges develop their confidence and campaigning skills.

“This partnership and the Parliament will give young people with disabilities a greater sense of power. If we stand together our voices will get louder and louder and the politicians at the Houses of Parliament will have to listen,” he said.

Clare Howard, chief executive of Natspec, said the Student Voice Parliament, and the partnership with NUS, will help students talk to policy makers and get involved in projects at a national level.

“Most Natspec colleges have student unions and that learner voice is important for quality provision,” she said. “The NUS is helping the students find their voice, and the students are helping the NUS include students with disabilities in their wider work.”

Another issue raised at the event was the need for disability awareness to be a compulsory part of the curriculum.

“There are so many widespread misconceptions about disability and those misconceptions  can have a direct impact on people with disabilities, such as being a barrier for someone getting a job,” said Rebecca Thorne, who is in her first year at Queen Alexandra College and studying creative media.

“We struggle to get funding and those who make those decisions need to remember we are not numbers, we are individuals.

“People with disabilities can contribute to the community but they need the right education and training to take up those opportunities.”

“It was a pleasure to be be at the first meeting of the Natspec Student Voice Parliament and to hear their concerns and priorities for the next year,” said Rachel O’Brien, NUS Disabled Students’ Officer elect.

“As member colleges of NUS it is important NUS and the NUS Disabled Students’ Campaign incorporate their demands into our work for the coming years, as often these differ from students in mainstream education.

“We must listen to the voices of students who have for too long been ignored by NUS.

“I look forward to working with the Student Voice Parliament in the future in fighting for the changes they want to see in their colleges.”