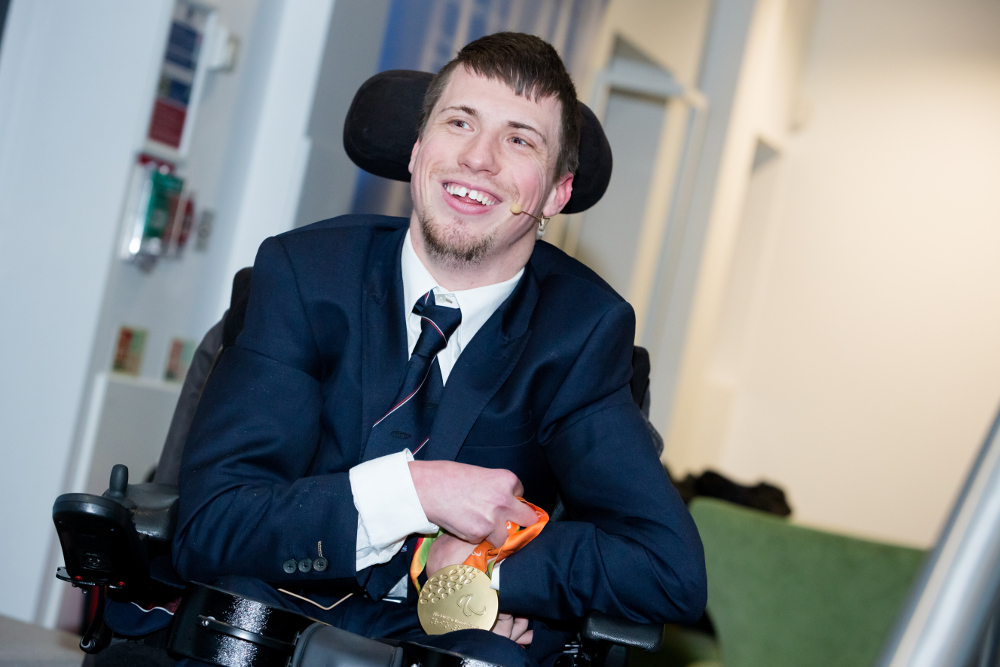 Paralympian medalist David Smith MBE made a guest appearance at the 2017 Natspec conference.

Paralympian medalist David Smith MBE made a guest appearance at the 2017 Natspec conference and talked about how his experience at specialist college helped his sporting career.

David has won two gold medals and is the joint most successful British boccia player in the sports history. He was the special guest at the Natspec Conference held in Birmingham.

“The one thing that stands out about my time at Treloar’s was that it gave me the opportunity to compete and to perform. You don’t get that in mainstream. The reason is that they don’t have similar peers,” he told delegates.

“In mainstream PE teachers don’t know anything about boccia.

“At Treloar’s I had physiotherapy and occupational therapy on tap. It was part of my programme. I had a chair that was designed for me. I wouldn’t have had any of that in mainstream college.

“Specialist college gives people a chance to go into the world with confidence, to strive for more.”

More than 150 delegates attended the two-day Natspec conference. The 2017 conference focussed on how providers and partner organisations have been working to make improvements through staff expertise, high quality resources, and a multi-disciplinary approach.

Workshops on Maths and English and Prevent were among the most popular with the delegates.

Clare Howard, Natspec CEO, said:”This year’s conference was fully booked and it was wonderful to see so many of our members getting involved.

“The programme focussed on exploring ways of working for the future and we are grateful to all the speakers for some thought provoking sessions.”

Positive and forward looking atmosphere at conference this year with content that supported this. Lots of fresh faces – evidence of changes in the sector.