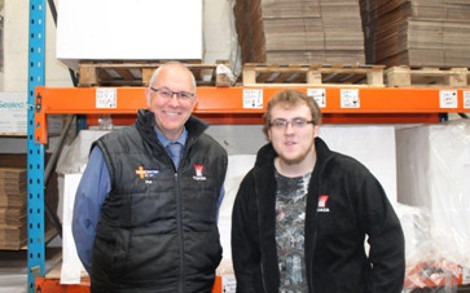 Jordan, from Portland College, was such a star in his work placement that the company offered him an apprenticeship.

Jordan, from Portland College, was such a star in his work placement that the company offered him an apprenticeship.

Jordan started at Portland College as a very amenable and chatty young man who was academically bright. His disability meant he liked structured routines, could struggle with social interaction and tended to dislike busy or crowded places.

He could also get easily frustrated and struggle to concentrate on set tasks or any activity that was ad-hoc in nature.

As a priority Jordan needed to develop his social skills to help him establish friendships and make useful links. Jordan was keen to continue his education but had primary goals which leant towards developing confidence, improving social skills and moving into paid employment.

Jordan commenced his first work experience opportunity in the Student Shop at Portland College whilst at the same time working towards a retail qualification.

During this time he took significant strides in improving his social interaction and communication skills as well as finding out about the retail trade.

While looking at external work placement opportunities Jordan undertook a work focussed visit to County Battery (Kirkby in Ashfield) where he found he liked the type of work carried out in the warehouse. He began a work placement attending one day per week. Initially he was supported by a job coach and then supervised directly by County Battery employees who had received specialist autism training from Portland College.

As they were nearing the end of the placement managers at County Battery recognised that bringing it to an end would leave an ‘employment hole’ within the organisation.

Jordan has started an apprenticeship through the company which will be based around his role in warehouse distribution.

Phil Dobson, sales director at County Battery, says: “County Battery has introduced a lean culture into the business and hold daily meetings, where each staff member chairs /runs the meeting, Jordan is working towards holding one of these meetings in the future which is a sure sign of his development and what work experience can do for young people.