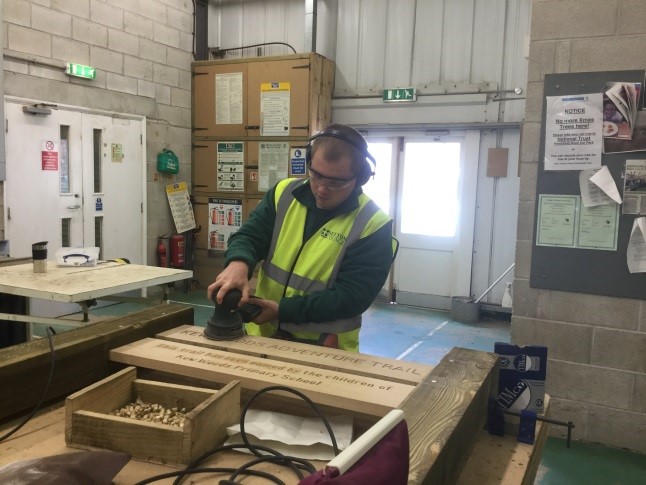 With college support Nathan has made a smooth transition to his new life as a young adult.

Nathan started his final year in LEAP College in September 2016. Nathan indicated through tutorial time that he felt ‘sad’ about moving on from LEAP and confused as to his future options.

After much discussion with parents and Nathan he decided he would like to visit Green Slate Farm, My Life Centre and The Domino Partnership.
Although all these potential future placements had their own special merits, Nathan identified The Domino Partnership as a place he would like to go to as this allowed him the opportunity to follow up his interest in role play and drama.
Over the course of the year Nathan has been involved in the whole class transition visits and through these he has spent time with the Rangers Natural Alternatives Programme in Sefton.
Nathan stated he would like to work with the Rangers when he left LEAP. The outcome agreed was that he would commence a one day per week work placement with the Rangers in Sefton, initially facilitated by LEAP staff, until Nathan was confident enough to undertake the full day with no support.
Nathan commenced his independent transition work placement and thanks to the close working partnership of Rangers, parents and LEAP staff Nathan has settled into his future work placement with ease. Along with his best friend Thomas, Nathan is now a happy and confident young man. He has displayed enormous levels of resilience and flexibility. Essentially his voice was valued and he was supported to communicate his wants and needs resulting in a successful transition and a fabulous future work opportunity.
Nathan’s parents said: “Nathan’s transition from LEAP College (Wargrave House School) to Ainsdale Rangers has been successful thus far. He has been a student at Wargrave House School for 15 years and this has got to be the most difficult change in his life so far.
“The school and college have been there for Nathan implementing his personalised transition plan and have worked alongside the Rangers during his last year in college. The Rangers were able to identify Nathan’s skill and this has helped with his confidence and hopefully his self – awareness will continue to grow and enable him to work towards achieving his future goals and aspirations. This process has been vital to Nathan’s transition and without this support it would have been very challenging.”