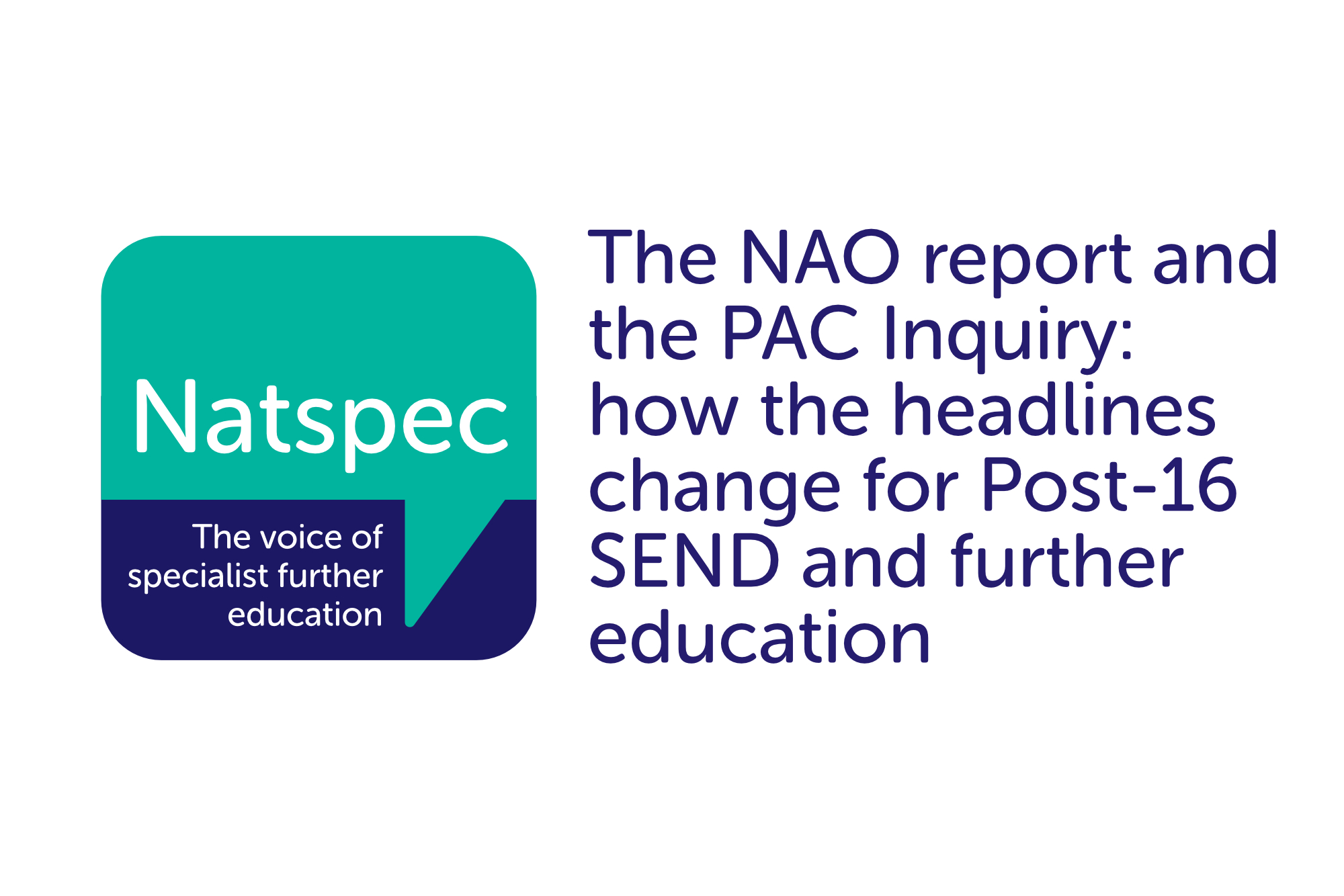 The NAO report and the PAC Inquiry: how the headlines change for FE

Home > News > The NAO report and the PAC Inquiry: how the headlines change for FE

The 2014 SEND reforms intended to create a new single system for all those aged 0-25.

Too often, policy and spending decisions are based on data taken only from schools.

The National Audit Office report, ‘Support for pupils with special educational needs and disabilities in England’, published on 11 September and the Public Accounts Committee Inquiry launched on 30 September refer only to ‘pupils’, ‘schools’ and ‘children’.

The omission of those aged 16 to 25 presents an incomplete and misleading picture which is unhelpful when looking to improve the system as a whole. There are significant differences in the post-16 SEND system – in terms of spending, patterns of provision and trends.

There is a danger that future policy developed to solve issues in schools will be applied to colleges, when different solutions are required.

Natspec calls for an increased focus on FE and policy priorities for those aged 16 to 25.

Detailed research on post-16 commissioning is required. The Department for Education should do more to encourage councils to work together to take account of different travel patterns and catchment areas for further education.

Future budgets and spending decisions need to redress the balance between pre and post-16 and address the significant shortfall in post-16 LA and FE budgets.

The 2014 SEND reforms created a new single 0-25 system, but too often the focus of reports about its implementation is on school-aged children only. Early years and further education are hardly getting a look-in.

On 11 September, the National Audit Office published their report on Support for pupils with special educational needs and disabilities in England. In response to the report, the Public Accounts Committee (PAC) has opened an Inquiry to consider “whether children with SEND are being supported effectively and the outcomes of that support; and the funding, spending and financial sustainability of SEND support.”

Both the NAO report and the PAC Inquiry refer to the 0-25 SEND system but their focus is almost entirely on schools. The NAO report refers to pupils and schools throughout. Its conclusions are based on data from the Department for Education’s school census and data on school places from local authorities.

How can we review the effectiveness of the system as a whole and come up with fixes where thing are going wrong, if we only consider one section of the demographic?

As a Further Education organisation, we are particularly alarmed at the omission of mainstream and specialist colleges, work-based learning and other providers of FE. Not to mention the complete absence of adult provision or adult social care in any of these reports or reviews. After all, we know from the SEND Area Reviews undertaken by Ofsted and CQC that there is often a dearth of opportunities available to young people leaving education.

It is essential that future policy-making and decisions on spending are not based on such a partial picture. There must be separate, detailed consideration of what is happening post-16 because the issues and the solutions for young people with SEND are not the same as for children.

Here is a selection of headlines from the NAO report, and how the picture changes for young people aged over 16 in further education:

Local authorities’ spending on school transport for pupils with SEND has also increased significantly and was £102 million (18.4%) over budget in 2017-18. — Paragraph 13, NAO Report

Spending on school transport has increased significantly. But for post-16, councils are making cuts to transport spending.

The planned expenditure for 2019-20 reported in S251 data shows a decrease in mainstream home to school post-16 transport of 16.4%.

The main reason why local authorities have overspent their high-needs budgets is that more pupils are attending special schools. — Paragraph 14, NAO Report

The main reason for overspend relating to children is increased spending on special schools. But LAs report that a more significant budget pressure is the post-16 age group.

The LGA report that “increased post-16 responsibilities was the single most commonly cited factor contributing to the growth in high needs spending by local authorities… this age group constitutes 17% of high needs expenditure.” LGA Dec 2018)

The cost of provision

Spending on independent special schools is increasing. But LAs are reducing their overall spend on specialist colleges.

Neither mainstream GFE colleges nor specialist colleges are maintained by LAs, so there is no direct equivalent to independent special schools in FE.

Young people placed in Special Post-16 Institutions represent about 9% of the total number of 16-25-year olds with EHCPs in Further Education. This percentage has not changed for the last 5 years. (SEN2 and ESFA data)

Pupils with SEND, particularly those without EHC plans, are more likely to be permanently excluded from school than pupils without SEND — Paragraph 19, NAO Report

Exclusion of pupils with SEND is an issue in mainstream schools. But mainstream GFE colleges are including a rapidly increasing number of learners with SEND.

The Education Select Committee Inquiry into school and college funding reported that “Twice as many disadvantaged 16 to 18 year-olds go to further education colleges than school sixth forms”.

The number and proportions of students with SEND in GFE colleges are increasing rapidly according to ESFA High Needs place number data. Numbers have doubled from 15,000 in 2013/14 to almost 30,000 in 2018/19.

The system for supporting pupils with SEND is not, on current trends, financially sustainable.

Many local authorities are failing to live within their high-needs budgets and meet the demand for support — Paragraph 23, NAO Report

The NAO report accurately highlights the funding crisis. But it does not report that cuts since 2010 have had a more lasting and deeper effect on FE.

“Post-16 education has been cut to the core. We note the Minister’s position about post-financial crash difficulties. Other sectors have however moved on. The continued underfunding of this pivotal stage in education is longer justifiable. These budget pressures are the result of political decisions that have had enormous impacts on young people’s educational opportunities and undermined attempts to tackle social justice. The Department must act urgently to address the damage that has been done.”

And in relation to SEND: “The post–16 sector in particular is having to deal with significant challenges in the context of enormous funding constraints. This is not sustainable.”

Whilst some of the findings and recommendations of the NAO report are relevant across the whole of the SEND system, in other cases, the story for the post-16 age group and further education is very different.

There is a danger that unless these differences are studied more fully, policy making will be flawed, since it will be based on incomplete and incorrect data.

Policy makers need to understand the complete picture from 0-25 including early years and FE in particular. If they continue to rely only on data from schools, the ambition of the SEND reforms to create a single system from 0 to 25 will never be realised.