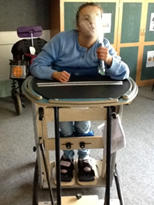 Not one job - but three!

Robert not only as a paid job but also two further work placements.

Home > Student Stories > Not one job – but three!

Robert, who has complex learning disabilities along with severe communication difficulties has undertaken several regular and varied work experience placements over his three years at the Royal College Manchester.

In March 2017, Laltex, who are long standing supporters of the Seashell Trust, identified a part-time paid employment opportunity for a student currently undertaking the Supported Internship programme. The role involves working with a small team in their unpacking department.

Taking into account the skills and aptitudes required for the role and the fact Robert had excelled at the task during work experience at the company, he was offered the position.

Robert, being on the Autism spectrum, thrives on basic repetitive tasks, such as removing items from their packaging and stacking them ready for printing. The Managing Director is exceptionally pleased with Robert’s contribution to the department and is delighted to welcome him into the “Laltex Family”.

Not only has Robert been successful in attaining paid work, but he has also received offers to continue his voluntary placements at the National Trust and Grow gardening projects, as they consider that he does such a good job and his input is valued by both of these charitable organisations.

Supported Internship students leaving the Royal College Manchester are considered to have done well to have attained one job or work placement for one or two hours per week, but to have been offered three by merit alone is exceptional.