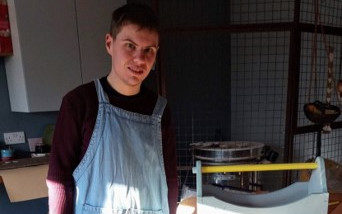 The Mount Camphill Community student Chris Sterry has been awarded the top prize in this year’s Maths Week competition. Chris’s video showcase summed up everything Maths Creative was about. He demonstrated the skills we were looking for, showcased the variety of maths skills developed through creative activity, showed an awareness and engagement with the task, and thoroughly enjoying himself!

Chris made a tiled splashback for a kitchen, measuring the tiles, creating a repeating pattern and worked out a price for the full splashback. As a prize, he has been awarded a personalised tape measure, marking him out as the winner of Natspec’s 2019 Maths Week.

Chris’s win was announced at a drinks reception sponsored by Scanning Pens at the Natspec National Conference on 2 April to a large crowd of attendees.

The other entries that made our shortlist for the prize are as follows:

Jake, Courtney, Kieran and Daniel from Cambian Pengwern, for their experiments with shape, colour and recurring patterns in designing a set of tiles. Paul Milner from National Numeracy, our competition judge, commended them on their team effort and how they all tried something different.

Ellie, Tom, Cher, Joe and Iesha from Fortune Centre of Riding Therapy used counting, estimation, measurement, angle and shape alongside GPS to plot out and create large scale drawings of horses. Paul was impressed that they got out in the open, used different methods of measuring and planned their activities well.

Kyle, Keaton, Eric, Karolis, Matty and Leah from Portland College built a cart to display and sell produce. They had to use a range of maths skills, measuring the cart and ensuring it would fit through the glasshouse door. Paul commended them on their great use of practical maths skills.

We had a wide range of entries this year and would also like to honourably mention Derwen College, Condover College and The Orpheus Centre for giving us a fantastic showcase of creatives maths across the college

Natspec’s Maths Week ran from 25 February to 1 March, focusing on the maths skills developed while participating in creative activity. Maths Week is delivered in partnership with National Numeracy and this year saw hundreds of students participating over the course of the week.

Participants excelled themselves during the week itself with the fabulous range of making, performing and creating on display. From upcycling furniture, to creating floral displays, from dance to drama. Learners were busy baking bread, making cakes, pottery, picture frames and cocktails. And the maths skills they were using were many and varied: we saw learners measuring, counting, ordering, estimating, using fractions and ratios, patterns and shapes, taking and giving instructions using positional vocabulary, sequencing, and comparing sizes and capacity.