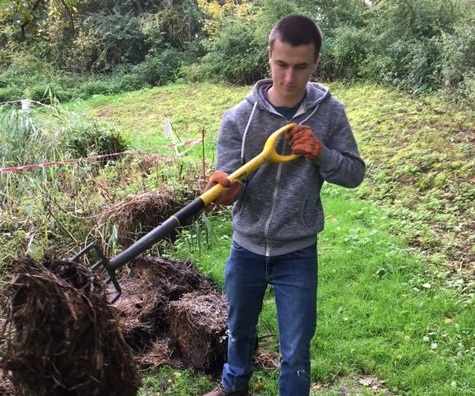 Liam participated in work experience which gave him opportunities to increase his knowledge of vocational areas and develop his social, independence and communication skills. Liam had a keen interest in horticulture and in this area,  it was clear he had more confidence and was keen to learn.

In his second year Liam has begun a Supported Internship at Creswell Crags supporting the grounds team to look after the large site. Liam has continued to develop his communication and independence skills through his Internship and his confidence has increased significantly. Liam is learning to travel independently to his placement with support from his Job Coach and is now able to do the journey with minimal support.

Liam has participated in a wide variety of horticulture and grounds maintenance tasks and regularly completes tasks such as litter picking and tree pruning independently. When Liam’s programme ends in July he will continue his work at Creswell Crags as a volunteer.

His Job Coach says “Liam has become a great help at the Crags in helping Jim keep on top of jobs, mainly in the upkeep and the appearance that Crags prides itself on. Liam has learnt a number of tasks, that he is able to do independently thus freeing up Jim to start on other projects.”