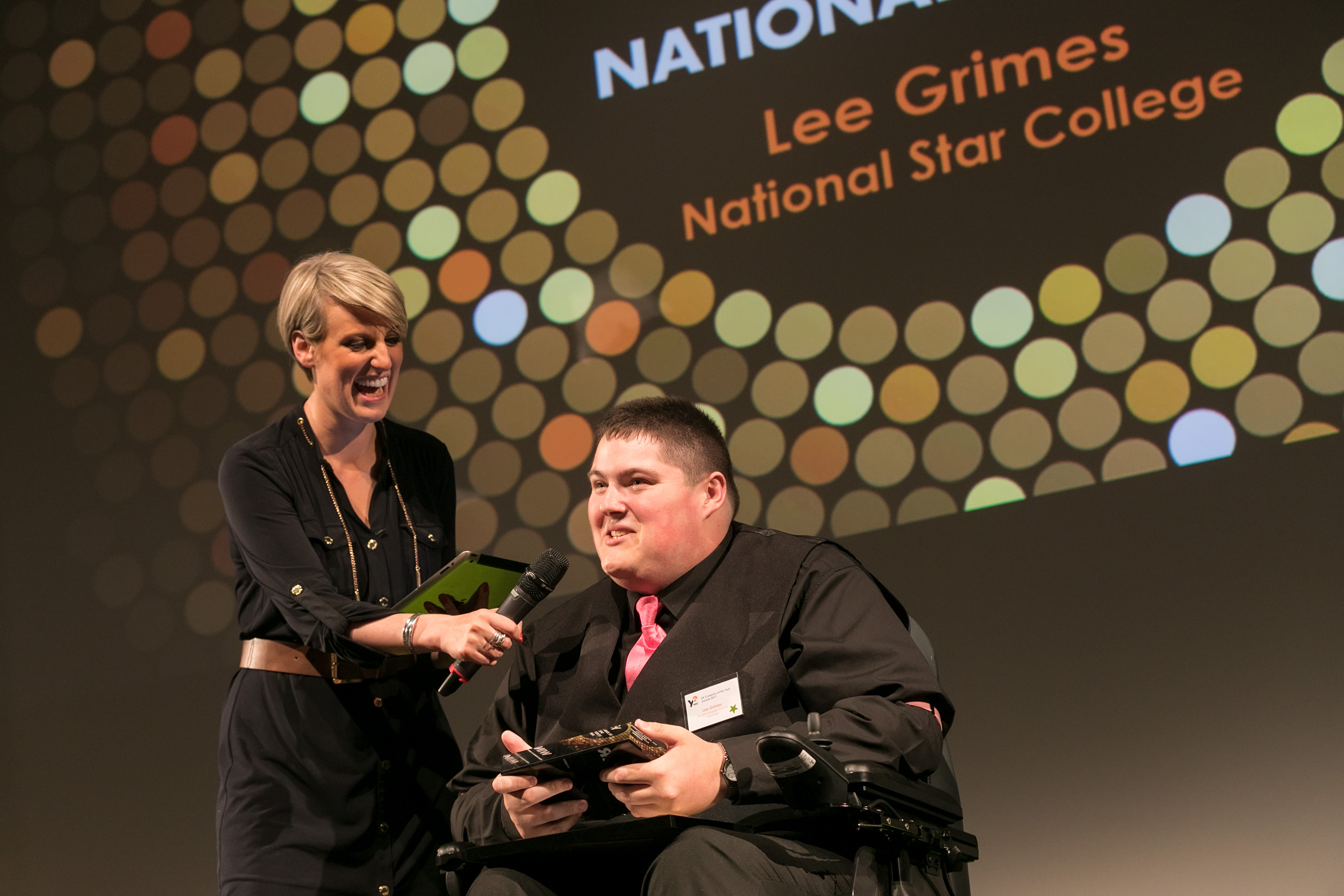 A teenager who was so shy he’d pull his hoodie over his head so people wouldn’t speak to him proved how far he has come – by giving a moving speech at the national HSBC Young Enterprise Awards.

Lee won the national special achievement award in recognition of his personal development from a shy and nervous person to an outgoing and confident young man and managing director of National Star’s Young Enterprise company.

Not only did he collect his award, Lee, who is a Skills for Work student at National Star, spoke in front of almost 500 people at the gala dinner BFI, London.

“I couldn’t believe it when they said I had won,” said Lee. “When I went on to the stage to collect my award they asked me about my goals for the future and told them that I had had a paid job.

“Then they asked me what words of inspiration I would give others and I said ‘listen to your thoughts and feelings and ask for advice’.”

Michael Mercieca, Chief Executive of Young Enterprise, said: “Lee overcame his extreme shyness to lead his team to win the Team Programme area final and he captivated myself and the whole audience with his eloquent and inspiring acceptance speech – Lee fully deserves this award.”

“When Lee first arrived at National Star he was the most shy, quiet and nervous person I had ever met, partly from his experience of being badly bullied in his previous mainstream school,” said James Garrod, Enterprise Developer at National Star.

“He wore a hoodie at all times with the hood up to cover his face. He wouldn’t speak to anyone on his course and would not join in any activities.”

Lee has cerebral palsy and uses a wheelchair. The 18-year-old said hiding in his hoodie was his way of coping with bullying.

“At lunchtime I would sit with my blazer over my head so that people wouldn’t talk to me and the bullies leave me alone,” he said.

“I never felt included. That changed at National Star. There I was asked my opinion and encouraged to voice my concerns.”

He reluctantly agreed to be managing director of National Star’s Young Enterprise company – called PIP for Personal Image Printing – after voted in by the team.

Lee, who is a Skills for Work student at National Star, is currently working two days a week in a placement at Gloucestershire Royal Hospital. It is hoped that it will become paid work when he leaves National Star later this month.

“All my life I thought that I had a disability and who in their right mind would hire me. I always used to put myself down. Now I think I can be independent and have my own life,” he said.